Is one of the best ways I can think of to describe the last two weeks of my life. It started with the African-American Authors Expo in Timonium, MD on August 15th. The Friday night banquet honoring all of the authors was awesome as the theme of the night was “You’re Amazing!!”, The highlight of the weekend was the day-long book sale on Saturday and that was Amazing too!. It was also an emotional day for me, as many of the folks who came to my table were greatly impacted by the new banner I was displaying for the first time. Two women actually cried at my table as they thought of their own family struggles with dementia, and for a brief time I was speechless. Hopefully I provided some comfort to them with my presence and understanding and through my book which they both purchased. I needed some reflection time before I could actually write about that day and the many feelings I was left with.

Next on the list of highlights was the drive to Baltimore on August 20th for another Arden Courts Memory Care facility book tour event!! There were bad storms that night, BUT those of us who made it had a ball, and I made a new friend too! It was simply another great night to honor my Mom!

Last weekend we made our second full camping trip to Hagerstown, MD. The weather wasn’t the best on Saturday as it rained the entire day, but we made the absolute best of it by doing indoor activities. We ventured into Hagerstown to the Farmers Market and what a treasure that was! We enjoyed looking at all of the fruits, veggies and homemade goods and brought several items to add to our weekend meals. They had arts and crafts too, and I was especially proud to purchase a hand-made Christmas ornament from an 85 year-old Hagerstown resident who’s glistening white hair reminded me so much of my Mom. Of course I purchased a purple ornament, the color for Alzheimer’s awareness. Outdoor activities resumed on Sunday as the weather was gorgeous. We even lived a lot of history by visiting Antietam National Battlefield and seeing a re-enactment that included a demonstration with the cannons! Antietam was simply breathtaking and I added three historical stamps in my newly purchased National Parks Passport!! It has always been a dream of ours to visit as many National Parks as possible, and now that we’ve actually begun, we’re very excited!! I brought a kids Passport for Kendal too ans she will she sharing in many of the adventures with us!

The GREAT times continued this week with daily visits from Kendal!! Tim was babysitting for her this week as her school was closed. We even added to our family of vehicles (as if we needed another one) with one just for Kendal. It’s a battery-operated (driveable) Cadillac Escalade that Kim saw in her favorite thrift shop. We simply couldn’t resist as it was more than half off the retail price. The truck is awesome and Pappy taught Kendal how to shift gears to go forward and backwards. At first she wouldn’t drive alone, and Kim HAD to be with her, but Tim convinced her that it was more fun to ride alone and by the end of the week she had it down pat!! I would rush home from work at 2 pm and jump out of my clothes to get down on the floor and play with her. I had to teach a class on a couple of evenings that Kendal was with us, but I’d come home first anyway just to have two hours of fun with her. You can get in a lot of running, jumping, coloring, tea partying, car driving and Lego Building in two hours!! What a blast that was!! She is a hoot and a truly great kid who listens intently, is polite and very grateful for what she is given. I feel as if I’m going to burst with joy when I’m with her!

On Wednesday,I had lunch with one of the coordinators of the upcoming Women Against Alzheimer’s Out of the Shadows Summit coming up on Sept 16th and 17th her in DC. I turned in the shadow box (large photo frame) I made of photos and memories from Mom’s life that will be on display at a DC museum for a few days before we carry them to Capitol Hill to share our stories with members of Congress as part of the Summit! I’m beyond excited to be participating in this event and to have our voices heard on the Hill to bring more awareness and advocacy for Alzheimer’s Disease! I can’t wait!!! I know it will be emotional telling the stories of our Shadow Boxes (it was emotional putting it together, but I’m thrilled with the opportunity to do so! I believe Mom would be very happy with the objects and photos I selected for her Shadow Box because it’s truly “her”. 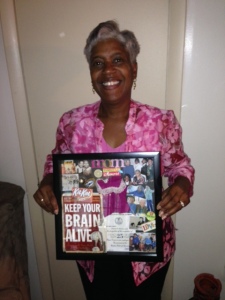 I also spent four nights over the past two weeks (and eight nights in the past five weeks total) teaching my favorite class for aspiring Security Officers at the Prince George’s Community College Safety and Security Institute, a course I helped to develop. The last three nights were the BEST with our students, and ended with graduation on Thursday night. Moderated by the three instructors and the Chief of the College’s Police Academy and Safety and Security Institute, we saluted each of the students as their loved ones beamed in the audience!! When we announced the student with the highest grade point average in the class, his mom yelled “That’s MY BABY!!” It was awesome! We even had jobs to offer them at the end of the course, as all of the students were Excellent. One of the parents shared that she credited me for helping her son to finally find focus in his life, and that he came home every night talking about Instructor Veney and how he wanted to be successful like her. WOW!!

And finally, the Best of the Best came yesterday. I went to see Mom before heading out on our next camping adventure. As usual, I went without expectations and this time was rewarded with moments of clarity for her. She didn’t initially call me by name, but remembered me as we talked, something she hadn’t done for several months. When I asked if she remembered who I was, she exclaimed “You’re Loretta!!” as if I should ALREADY KNOW who I am!!! We then burst into laughter!! I gave her a big hug and she smiled!!! I can’t actually put that feeling into words, but it was powerful!! Though Mom seems to be losing some of her energy, we had a great time just being together, and for several minutes we just sat quietly and held hands.

We were on the road to a campground on the C&O Canal near Harper’s Ferry by noon and had arrived by 3 pm. All of the peace and quiet since we’ve arrived has allowed me the time and space to reflect on all of the Awesomeness that’s occurred over the past couple of weeks. All of the memories have come flooding back in a blur of happiness, achievement and gratitude …… and what a beautiful blur it’s been!! I truly love my Life and all of the Blessings I’ve been given!!

4 thoughts on “A Beautiful Blur!”