As we prepare to sit down for Thanksgiving dinner, I realize how blessed I am. Four weeks ago today, I was sitting in an emergency room bay, receiving confirmation that Tim had had a heart attack. My mind was racing. I was hearing cardiac rehab for months, lots of medicine and a brand new diet. As I was starting to worry about the future held, I stopped myself and remembered that Tim was alive and was going to be ok, as long as we followed the instructions we’d be given. The worry subsided, and instead I was thankful!! 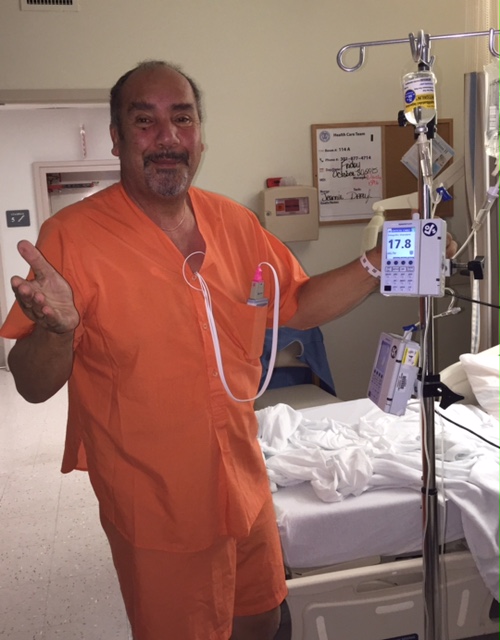 I’m also thankful this year for all of the people’s lives I’ve touched who share the amazing journey with me of being a caregiver of a person living with dementia. As I’ve spoken to hundreds of people all over the country, I am astounded by the impact I’ve made, the hope I’ve given people, and the tears and laughter I’ve shared with them. The last presentation I gave last week in Roanoke, VA, I was thrilled to be able to have Tim with me as his recovery was well under way! I’m most thankful! 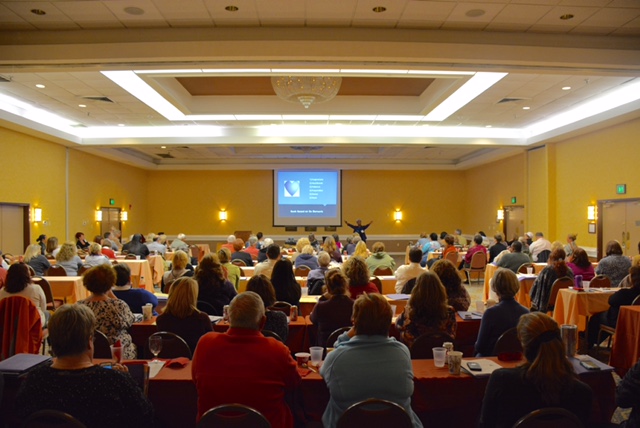 I’m also thankful that though Mom doesn’t know who I am, we are still able to spend so many great moments together. We can still laugh and read together, and her ever sharp wit still remains. For her, and all of the great lessons she taught me, I’m so thankful! 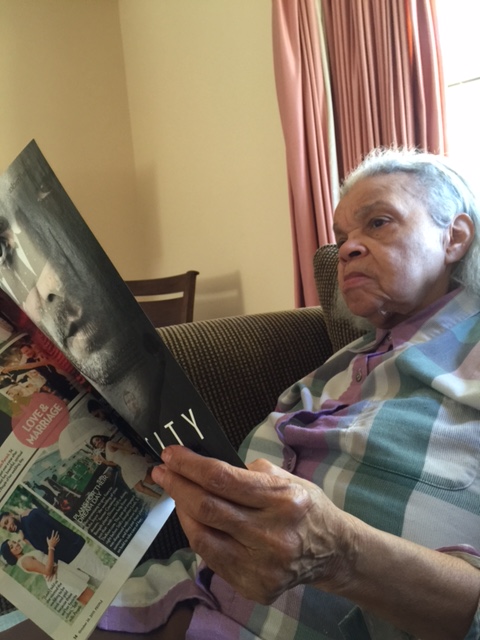 Finally, I’m blessed to have a small but very loving family, a very large group of very loving friends and an amazing and supportive church community! I treasure the time I get to spend with our awesome granddaughter Kendal, and she’s truly the joy of our lives!! The sheer happiness with which she lives every moment of her life is inspiring! For her, I am thankful! 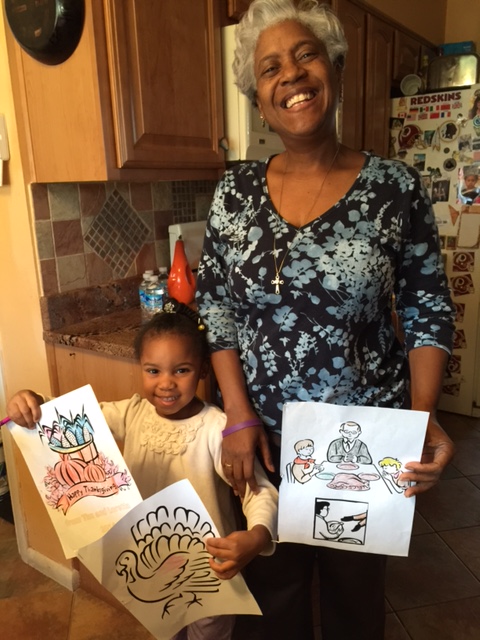 I wish everyone in this world was as blessed as I am, but because that isn’t the case, I say a special prayer today for all those less fortunate than I am. I pray that all of us will not only be kind to each other today, but to carry this over into next year. Let’s all think about the wonderful things and people in our lives. Let’s tell those closest to us that we love them. For all of the amazing things and people in my life, I’m just thankful!

We usually only get gifts on our birthdays, Christmas and maybe Valentine’s Day. But this past Thursday on October 29th, a perfectly ordinary day, I got a greatest gift of all – my husband Tim’s life! I hate to generalize, but men can be really stubborn when it comes to their health. When Tim told me last Tuesday when I got home from work that he had heartburn, I was immediately alarmed. He hadn’t had heartburn in years, AND we’d eaten nothing that would trigger his typical heartburn symptoms. My first comment was “let’s go to the ER”. Of course he said no, and that he’d be fine after a shower which always alleviated his heartburn symptoms. The shower did lessen his symptoms but definitely didn’t eliminate them. On Wednesday, Tim had a couple of airport runs, and some required paperwork to turn in regarding his sedan business. I asked him to go to the brand new Patient First facility in Clinton when he was finished with all his work. He said he’d go the next day on Thursday when his schedule was totally free and that he would be there when the urgent care facility opened for the day.

I went to work on Thursday definitely worried that Tim wasn’t feeling any better, and anxiously awaiting his text that he was on his way to Patient First. True to his word, Tim text me at 9 am to say he was on his way there. I was hard at work preparing to host the final session of the quarterly four week security class that I manage for the Department of Homeland Security. Ninety minutes later our life would change when I got a call from Tim’s cell phone. When I answered to get the report of his doctor’s visit, I could hear a lot of commotion on the background. People were talking with raised voices to the point that I almost couldn’t hear Tim. “They found something and have called the ambulance for me to go to the hospital” he said. “What??? What did they find???” I asked. He stammered and then said “something’s wrong with my heart”. I then heard a woman’s voice yelling “tell her you’re having a heart attack!”. I was stunned!! I then heard the sound of an ambulance in the background and Tim said “I have to go, they are taking me to Southern Maryland Hospital” which is literally down the road from our house.

I bolted from my job on Capitol Hill, getting to Clinton, Maryland in less than 15 minutes. When I saw Tim laying on the ER gurney, I was so relieved! He was too. I could tell how scared he was and I hoped he couldn’t tell how afraid I was. We listened to all the doctors and he answered all of their questions. Within the first hour, we found out that he definitely had suffered a heart attack, probably earlier in the week. It was even more scary to hear the confirmation! I told Tim that everything would be ok and that we’d conquer this “new life” of medicine, exercise and a brand new diet.

Tim endured three days in the hospital and two cardiac caths in attempt to determine the extent of the damage to his heart and to hopefully receive at stent. Kim and I held vigil with him and some of Tim’s siblings came for short visits too. The tests revealed a blood clot in the artery on the right side of his heart that turned out to be stubborn and unmovable even with medicine designed to dissolve it. The blockage prevented the placement of the stent but we were told that since he’d already had a heart attack, and his heart had made its own bypass, the blockage could be managed with medicine.

On Halloween day while Kim was sitting with Tim at home,  i was able to go to the Patient First facility in Clinton to thank the folks who had helped Tim on Thursday. Miraculously the RN who had been on duty when Tim came in was there. As soon as I said, my husband was here on Thursday with chest pains, she jumped out of her chair and said “you’re his wife? How is he?” I explained the last 48 hours of our lives to her and kept thanking her over and over. We hugged as if we had known each other all of our lives. I am beyond grateful to them!!

I have no idea what the next few months will be like for Tim. There will be cardiac rehab, getting used to lots of medicine when he used to only take on pill per day, and a totally new way of eating for him. Tim was shocked and very upset by his first day at home from the hospital because he slept all but maybe two hours of it. Getting in the shower and putting his clothes on took almost an hour, as he had to lay down for for 20 minutes after each activity. Having been there myself, I absolutely understand what he’s going through and I’ll constantly reassure him that as long as we follow all the directions, he’ll get stronger every day though it will take at least a month before he gets his strength back. Right now I’m sure Tim is still very afraid of what’s to come, but as I shared with him yesterday he’s been given a great gift of a second chance at life. Though Tim is the primary chef in our house, especially for the last few years, I’ll learn quickly to make meals that will keep him healthy and hopefully happy too! My plating is horrible, but at least seeing his plate of tilapia and sauteed veggies that I made put a smile on Tim’s face. 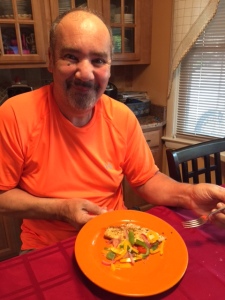 I’m ready to do whatever it takes to help Tim get back to the healthy and happy person he is!! It’s only November 1st but I’ve already received the greatest Christmas gift I could get, and that’s the gift of Tim’s life. As you prepare for the holidays in your own home, remember that you already have the greatest gift you could possibly have, and that’s the gift of your loved ones lives!