Tomorrow morning I’ll start a fairly long road trip. But I’m ready because I’ll have a very unusual secret weapon with me!! About 6 months ago while giving presentations in Pittsburgh I stumbled across a very cool coffee shop in a mall. I’m a Starbucks girl for sure, but this shop had a coffee mug in the window that drew me in!! First and foremost the mug is purple, the color for Alzheimer’s which I fight against daily! But it’s the words ON the mug that inspire me!! I began carrying the mug with me on the road and if I ever begin to feel sad without Tim I read the words over and over.

This last week was incredible and the joy in my life was overflowing!! Kim and I had an awesome Mommy / Daughter Day at the African American History Museum and saw a fabulous play at the Kennedy Center, I met for hours with a new friend named Reenu after verging the MLK service at church, I attended the wreath laying ceremony at the MLK Memorial in honor of his birthday, I was treated to a birthday dinner with my sister / friend Louise, I began writing a new LEGO-building seminar and finally yesterday I proudly watched my daughter serve as sign language interpreter at her church on the same day little Kendal was baptized!!

Does it get any better? It goes without saying that we missed Tim! He would have been bursting with pride and so was I! When I got home from the Spirit-filled service at Mount Pleasant Baptist Church I took out my Joy cup, filled it with tea and stretched out to relax and watch a movie. 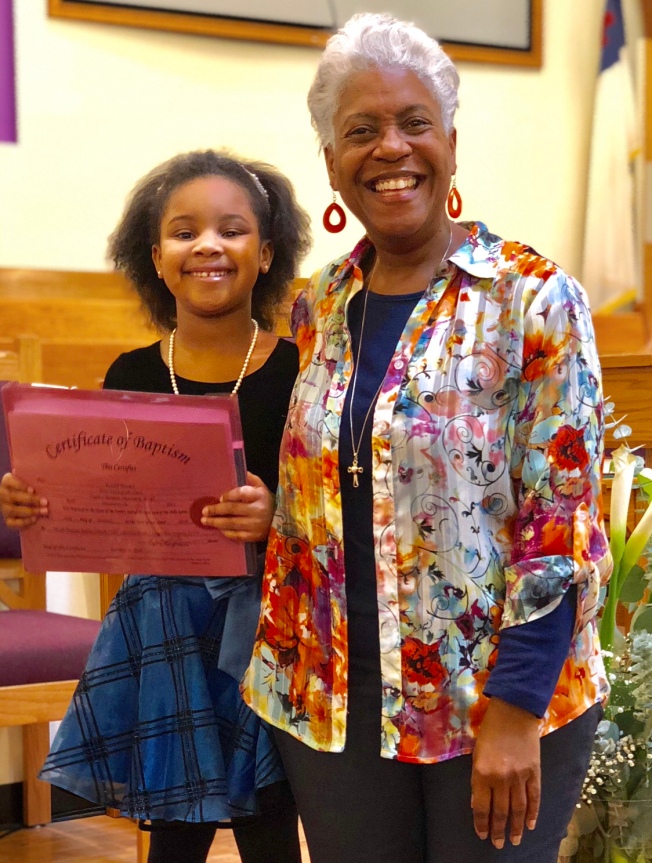 I know I have a long stretch in front of me when I’ll be away from my family, my friends and my church. But each day I’ll remind myself of all of the things I have to be grateful for and I’ll definitely see each day as a new beginning. If all else fails I’ll just take out my cup of Joy, fill it with my favorite coffee or tea and remember that my cup runneth over with love and joy! May your cup runneth over with Joy!!

This has been quite the birthday week so far! I received lots of cards, gifts, calls and texts from family and friends on January 3rd, but last night January 5th was about the Adventure Girls. Me, Kim and Kendal out on a frigid night at the really cool indoor electronic playground also known as Dave and Busters. But even before we went out to play last night, yesterday was a pretty emotional day. My car, which had been in the shop for almost 3 weeks after I was hit by a drunk driver on Dec 7th, was ready for pickup! In addition to actually being hit by the drunk driver, I also lost my credit card that night while exchanging information with the other drivers. When I received my replacement credit card three weeks ago I spent days giving the new number to all my creditors. (Full disclosure: I use my credit card to pay my bills to earn air miles.) So yesterday morning at the crack of dawn I was awakened by the Citibank fraud department to ask if I was in Italy charging 8K in computer equipment. Of course I said no, so they cancelled my new credit card. In order to pick up my car after work I had to dig out my debit card that I never use. When I picked up the car I was so relieved. I had gotten everything done, including filing the insurance claim and getting my car to the repair shop all without Tim, but it had been a very scary and emotional process for me. I was afraid that my car, which I had selected in honor of Tim, wouldn’t be the same as it was before the accident. I drove home cautiously, but the car with my cherished heated seats, was the same as it had been prior to the accident! What a relief!!

Then it was time to head to Dave and Busters for a night of fun! Even though it was almost zero degrees with the wind chill, I was so looking forward to it. And it was an awesome night! We had great food, and an amazing blue cake that Kim and Kendal made for me, and we played or rode all these really fun games! We squealed and laughed as we ran from game to game that Kendal picked out for us! Then I saw it, this 1980’s game called Pac Man which was Tim’s all time favorite that we used to play on small screens. This version was larger than life with two seats for two players! I asked if we could play that game and they were both all for it! But when it was our turn to play, Kim asked if I wanted to play Pac Man with Kendal, but I couldn’t move my feet for some reason and told Kim to play with Kendal instead. I got my camera out and recorded the two of them playing and I could hear Tim’s voice in my head screaming “YAY!!” and laughing hysterically in his booming voice!! It was so cool and I felt like I was going to burst!

At the end of all of the fun I headed home feeling so good as I drove with the card Kendal made for me on my lap. After arriving home I started to slice and package the rest of the cake they’d made for me so I could freeze it and enjoy a piece at a time for weeks and months to come. I put a few slices in freezer bags and the next thing I knew I was crying. Not just a few tears, I was bawling! I put the knife down and sat in the kitchen and cried my eyes out for more than an hour. Why was I crying? I wasn’t really sure at the time! Right before midnight I finally got all of the rest of the cake slices in the freezer and fell into bed with all of my clothes on. I was exhausted!

I woke up this morning still shaken and really sad. I believe that yesterday was more emotional than I realized as it was unfolding. Getting the car back after weeks of worry, learning of the fraud on my credit card, and the family night at Dave and Busters which Tim would have loved doing with us! I miss him so much but didn’t see this emotional breakdown coming… I think seeing Tim’s favorite Pac Man game was a huge trigger for me because we used to spend hours playing that game! So I’m moving slowly today, allowing myself to feel what I feel. I’m going to just sit by the fireplace and enjoy the frigid temperature only from my window. As I was typing this post, my replacement credit card arrived via FedEx. Now I move on to the chore of changing my credit card number with my creditors yet again. I can hear Tim saying, “it’s going to be ok”… and I know that it will. People say that the second year without your loved one is worse than the first so I’m guessing that’s what is happening with me. In terms of my New Year’s Frame post, I put this experience in my “Life Frame” because loss and grief is all part of life. This birthday week deserves a spot in my Life Frame because it really has been special, with great friends and a special night with the Adventure Girls. The book tour resumes this coming week and after a four week holiday break I’m looking forward to getting back on the road helping to support others and allowing them to support me. I know tomorrow will be a better day, so bring it on 2018!