When I woke up at 4am on May 16th, a paralizing fear washed over me. It was time to execute my plan of getting on the road and heading to Bar Harbor, Maine in my RV JOY to meet my friends Larry and Barbara on May 17th. But I laid in bed for almost 10 minutes too afraid to move. What was I thinking that I could drive to Maine by myself, including an overnight stay on the road in a strange place?? This was never going to work I thought to myself! Thankfully, I got out of bed at 4:12am and took a step. And the rest as they say is history….

The trip isn’t over, but it has already been one of the most fulfilling things I’ve done so far in my life… Camping in Maine was next on the bucket list that Tim and I started in 2014. I wanted to do it just as we had planned, spending one of Tim’s birthdays just as the season was turning from Spring to Summer but there was that doubt in the back of my mind that I wouldn’t be able to pull it off.

The trip up to Maine was amazing! It covered Interstates, highways, toll roads, and country roads and included four stops for gas. The question I was asked most was “are you traveling by yourself?” followed closely by “Is that YOUR RV?” During the drive, two warning lights came on on my dashboard indicating an issue with my Mercedes Benz engine. Surprisingly, I didn’t panic at all, but pulled over and consulted the manual as indicated. It wasn’t anything serious and resolving it could wait until I arrived in Maine. I was really encouraged by the fact that I didn’t panic.

My overnight stay was at a Cracker Barrel, which encourages RVers to have dinner with them and then stay overnight in their parking lot that includes really big spaces for RVs. Even that part of the plan worked to perfection. I arrived at my previously chosen location of Londonderry, New Hampshire and had my favorite dinner of four vegetables including their famous sweet potato casserole. I spoke with the manager as required who was thrilled that I’d be spending the night in the parking lot. I had a great night and after almost 11 hours on the road, I slept like log.

I rolled into Bar Harbor Maine on Friday the 17th around lunch time feeling as if I had accomplished a great feat! I think having driven almost 800 miles alone for the first time probably is a big feat. I got out of JOY and set her up quickly and easily. I then explored my surroundings. The water was everywhere around me, and I could see it from every one of JOY’s windows.

Though it was cold, I went outside to walk around. The wind was blowing and I could swear I heard Tim’s booming voice say “you did it babe!”. Tears started to roll down my cheeks, yet I simultaneously started to jump around like I tend to do. I had conquered my fear and was ready for adventure. My friends Larry and Barbara arrived soon after and we headed into town for dinner. We all had burgers and fries and caught up on all of the things we’d missed in each other’s lives since our camping trip last year to the Great Smoky Mountains. On Tim’s birthday on the 19th I was somewhat sad, but also very proud that I’d accomplished our goal. I wore his favorite color orange for him that day and we had a big celebration for him at dinner. I know he was with me in spirit.

In addition to our sightseeing jaunts that have included long hikes, we’ve talked a lot about Tim and about Erin, Larry and Barb’s daughter who died in 2010 from ALS. Erin’s 45th birthday would have been on the 20th, one day after Tim’s so we celebrated her too of course.

I’m having an extraordinary time here in Maine and still have a few more days left to enjoy! The things we’ve seen thus far in Bar Harbor and Acadia National Park have been surreal for me. There are multi-colored rocks and granite structures, huge boulders, planks along a hiking trail, amazing trees and plants, and stunning mountain and coastline views. 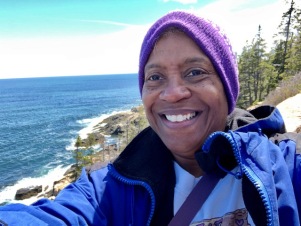 And to think, I would have missed it all had I not overcome my fear on the morning of May 16th and taken that first step out of bed. Sometimes all it takes to be successful is to take that first step!! I’ve definitely learned that life is too short to be afraid!